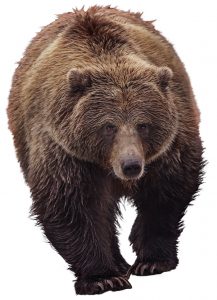 You need only read this List of fatal bear attacks in North America to realize that bear safety is extremely important. Hear are some things to keep in mind:

If you come into close contact with a bear, pick up small children and back away slowly while facing the bear. Talk calmly to distinguish yourself as human, rather than another animal. If the bear continues to move toward you, try to make yourself look as large as possible and make loud noises.

To be prepared for the worst, consider learning how to use and carry bear spray when in bear country. Bear spray is a very effective deterrent when used properly. In a 2008 review of bear attacks in Alaska from 1985–2006, Smith et al. found that bear spray stopped a bear’s “undesirable behavior” in 92% of cases. Further, 98% of persons using bear spray in close-range encounters escaped uninjured.

Bear spray is intended to be used to deter an aggressive or charging bear. A user points the canister at an aggressive bear and sprays the contents for 2–3 seconds. Effective distance will vary depending on the manufacturer of the spray, but sprays are reported to be effective when sprayed at a charging or aggressive bear from a distance of 1.5 to 3 meters.

Check with an outdoor retailer near you to see if they sell bear spray.

Brown bears and grizzly bears are the same species, called Ursus arctos. However, there are some distinct differences between them.

Although variable in color from blond to nearly black, grizzly bear fur is typically brown with darker legs and commonly white or blond tipped fur on the flank and back.

Occasionally a huge male grizzly has been recorded, whose size greatly exceeds ordinary, with weights reported up to 680 kg (1,500 lb). A large coastal male of this size may stand up to 3 metres (9.8 ft) tall on its hind legs and be up to 1.5 metres (4.9 ft) at the shoulder.

Although grizzlies are of the order Carnivora and have the digestive system of carnivores, they are normally omnivores: their diets consist of both plants and animals. They have been known to prey on large mammals, when available, such as moose, elk, caribou, white-tailed deer, mule deer, bighorn sheep, bison, and even black bears. Grizzly bears also feed on fish such as salmon, trout, and bass, and those with access to a more protein-enriched diet in coastal areas potentially grow larger than inland individuals.

Grizzly bears hibernate for 5–7 months each year except where the climate is warm, as the California grizzly does not hibernate. During this time, female grizzly bears give birth to their offspring, who then consume milk from their mother and gain strength for the remainder of the hibernation period.

To prepare for hibernation, grizzlies must prepare a den, and consume an immense amount of food as they do not eat during hibernation. Grizzly bears do not defecate or urinate throughout the entire hibernation period. The male grizzly bear’s hibernation ends in early to mid-March, while females emerge in April or early May.

In preparation for winter, grizzly bears can gain approximately 180 kg (400 lb), during a period of hyperphagia, before going into hibernation. The grizzly bear often waits for a substantial snowstorm before it enters its den: such behavior lessens the chances predators will find the den. The dens are typically at elevations above 1,800 m (5,900 ft) on north-facing slopes.

The average lifespan for a male is estimated at 22 years, with that of a female being slightly longer at 26. Females live longer than males due to their less dangerous life; they do not engage in seasonal breeding fights as males do. The oldest wild inland grizzly was 34 years old in Alaska; the oldest coastal bear was 39, but most grizzlies die in their first few years of life from predators or hunting.